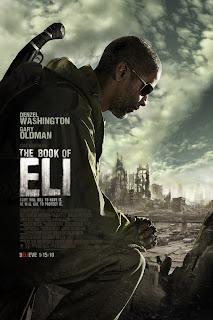 Information: Thirty years after a nuclear apocalypse, Eli travels on foot across the wasteland of the former United States. He demonstrates uncanny survival and fighting skills, hunting wildlife and defeating a group of marauders. Searching for water, he arrives in a ramshackle town ruled by a warlord named Carnegie, who seeks to control the people through the power of a certain book, which his henchmen have been unable to find.

Eli barters with a store owner, the Engineer, to recharge the battery of his portable music player. At the town bar, he is attacked by a gang of bikers but swiftly kills them all. Impressed, Carnegie invites Eli to join his employ, but Eli declines. Realizing Eli is a literate man like himself, Carnegie forces him to stay the night under guard. After Carnegie's blind mistress Claudia brings Eli food and water, Carnegie orders her daughter Solara to seduce Eli, but he rebuffs her. Solara sees Eli has a book, and he offers to share his food, saying grace before they eat. In the morning, Carnegie overhears Solara repeat the prayer to her mother, and realizes Eli has the book he has been seeking – a Bible.

Eli sneaks away, but Carnegie and his henchmen confront him in the street. When Eli refuses to give up the book, Carnegie orders him killed; the ensuing battle leaves Eli untouched, but many henchmen dead and Carnegie shot in the leg. Solara catches up to Eli and leads him to the town's water supply, hoping to accompany him on his travels, but he traps her inside and continues alone. Solara escapes and is ambushed by two bandits who attempt to rape her, but Eli reappears and kills them. Continuing toward the west coast, Eli explains his mission: his book is the last remaining copy of the Bible, as all other copies were intentionally destroyed following the nuclear war. He says that he was led to the book by a voice in his head, directing him to travel westward to a place it would be safe, and assuring that he would be protected and guided on his journey.